November and December have been extremely dry with only 12mm of rain falling in a 55 day period. This has meant that the need for irrigation has been greater and earlier in the season than years past. The dam on 1 January 2020 was at 60%, compared to last year when at the same time the dam was at full capacity. All bores are working at well however the deficit between how much water is produced daily and how much is required during peak periods is 60%. The longer this deficit continues the lower the dam level drops. Both the volume and distribution of our water is designed to supplement rainfall and not to stand alone during periods of extreme dry weather. If there is little to no rainfall over the next three months, we will again be in a position where the Club will either have to purchase potable water, or prioritise water use and only irrigate greens, tees and surrounds. 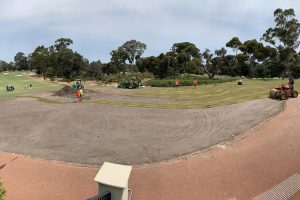 Santa Ana has now been laid on tees 1, 5, 6, 8 and 13. Tees 1, 6, and 8 have established and are back in play. Santa Ana is a warm season grass and has enjoyed the recent warmer conditions. Rubber mats have been installed at two entry points on the 1st tee. The turf will grow through and around the mats and they will become invisible during the summer months. During winter the turf will thin back to the rubber mats which prevent the turf thinning back to bare ground. The extra warmth the rubber absorbs will also help to stimulate growth.

There was a small surplus of turf left over from the planned turf work and this was used to replace the legend surround at the rear of the 5th hole. This should provide a good test area to determine if Santa Ana is a viable option for our green surrounds.

I have received several questions regarding water used to “grow in” the new tees. Growing in the three new tees has used an extra 4% of our overall water use in the first week, an inconsequential amount. Following the first week after planting, water use has been the same as the other tees.

The fairways were renovated on the week commencing 16 December and completed the following week. The process involved light scarifying and scalping down to a lower cutting height. The fairways have recovered well with the exception of areas that have poor irrigation uniformity and coverage. This is most noticeable on the 10th and 12th holes.

The 8th and 13th carry area is continuing to mature as anticipated. Progress has been accelerated in recent months due to the warmer conditions. Many of the plants have, or have started to, set seed. The seed produced will drop and germinate, and will assist in the natural thickening up and maturation of the area.